Ten years ago, in Adelaide, sitting cross-legged and barefoot in a suburban backyard, two friends and I began to write a film script. My companions were the phenomenal filmmaker Dan Lawrance and illustrious illustrator Chad Ashby. The proposed piece was a mockumentary, feature length, depicting the misadventures of pencil-pushing superheroes in the ‘city of churches’. The film was titled, Justice Squad. 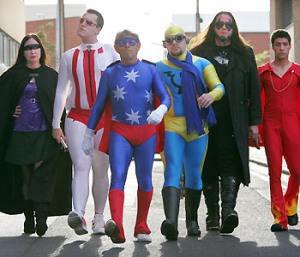 We made things up, then wrote them down. Then two years later, I received an email while travelling in India. Back in Australia, Dan had pitched the film at a media conference and been met with widespread enthusiasm. So upon my return, we doubled our efforts and rushed out a first draft of the script. But alas, nothing happened.

Then I travelled overseas again, and in my absence, with much gumption and grit, Dan hunted cast and crew. Over the last five years there has been a flurry of redrafting, casting, shooting and editing, all leading towards a finished film sometime soon. Slowly, Justice Squad came togther.

Some say that attempting to make a feature length film that requires high production values while possessing zero budget is madness… and they’d be right. Envelopes have been pushed and horses thrashed. However, God willing, there will be a premiere soon in 2012. God willing, Justice Squad begins…

For now, I will keep you updated as the post-production comes to an end. Here’s the Facebook page, go like it.