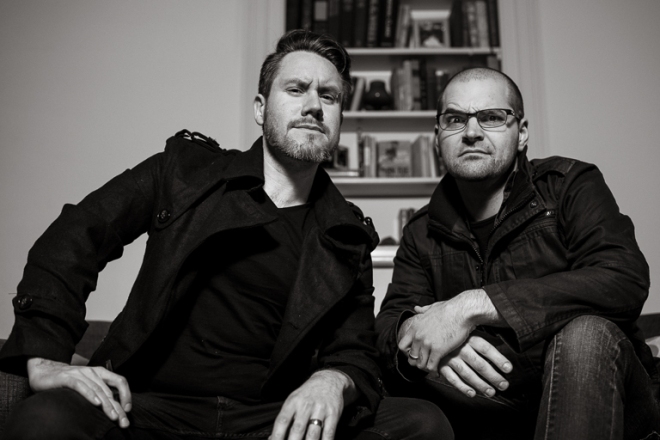 Here is the list of my articles, reviews, radio spots and book launches for this last cursed year…

I reviewed Gregory Mackay’s all-ages comic Anders and the Comet, online for the australiancomicsjournal.com and on radio for Arts Breakfast.

I spoke about Free Comic Book Day and graphic journalism on Radio Adelaide’s Arts Breakfast program in May. My corresponding article is on the australiancomicsjournal.com.

I also reviewed Mr Unpronounceable and the Infinity of Nightmares by Tim Molloy for Radio Adelaide’s Arts Breakfast.

I wrote about Donald Trump for Good Friday and reflected on America’s history of violence against protest.

I interviewed Brooke Prentis about the need for Australia to have a treaty with its Indigenous peoples.

Killing a Hero reflects on the character of Superman and its legacy in the Zack Snyder film Batman V Superman.

May the Fun Be With You considers the Star Wars franchise as an exercise in play-acting and reenactment.

Superman Noel Neill remembers the life and work of the first Lois Lane and the feminist significance of the character.

Chadwick and I launched REDWOOD, RAG DOLL and THE EVERYMAN’s THEORY OF EVERYTHING before The Ledger Awards at All Star Comics in April. You can read about the launch here and REDWOOD is now available on Comixology for $1.99. 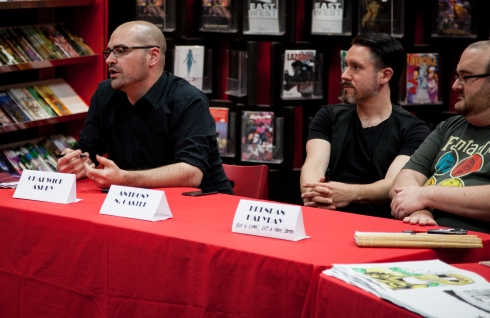 Chadwick and I launched our latest book DAPPLED in November (details here). DAPPLED is a dark, modern-day fairy tale that explores teen mental health and the power of language to shape our sense of self. I spoke about the book and on Radio Adelaide’s Art Breakfast program.

Chadwick and I were exhibitors at Supanova Melbourne and also Supanova Adelaide this year and we presented on panels at each event. We were also guests in the Artists Alley section of Adelaide’s Greenlight Comics on Free Comic Book Day, which was a great opportunity to connect with local readers. 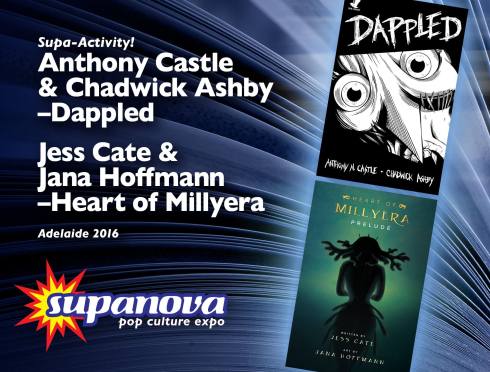 Chadwick and I have worked hard this year and felt it. Each release has been our strongest yet and we are seeing our audiences grow but it can be wearying, especially for Chadwick who carries the entirety of the art duties. We must be publishers as well as creators and that can be glorious and crushing in equal measure and often at the same time. We will still continue next year, however, as we have an exciting new release to announce next year and big things in the works. The labour is beginning to bear fruit.

The cursed year of bad words…

On a personal note, it’s been one of the saddest, most frustrating but delightful years yet. I saw David Bowie off the night before I first saw my son in an ultrasound image. My wife and I became parents in July, experiencing that newfound happiness while the politics of the West here and overseas sunk to new lows. Joy at home and tragedy in the world.

“Post-truth” was the Oxford Dictionary word of the year and as someone who makes their living as a researcher and a writer I have been awestruck by the manner in which language has been used to confuse the desperate and anger the uninformed. 2016 was the year that bad ideas and bad words won. As a wordsmith, that hurts.

My own beliefs, values and experiences have led me to always ally with the poor and powerless, regardless of their identity, culture, nationality or religion. This isn’t rhetoric. This is vocation. As such, I will continue to marshal the journalistic work in my day job, my creative work in comics and my freelance writing online to give voice to ideas like the equality of humanity and the sacred necessity of human rights.

The pen isn’t mightier than the sword, the pen is the sword, and good words like equality, safety and justice will not be mocked. Bad words might have won 2016 but good words can win the future.